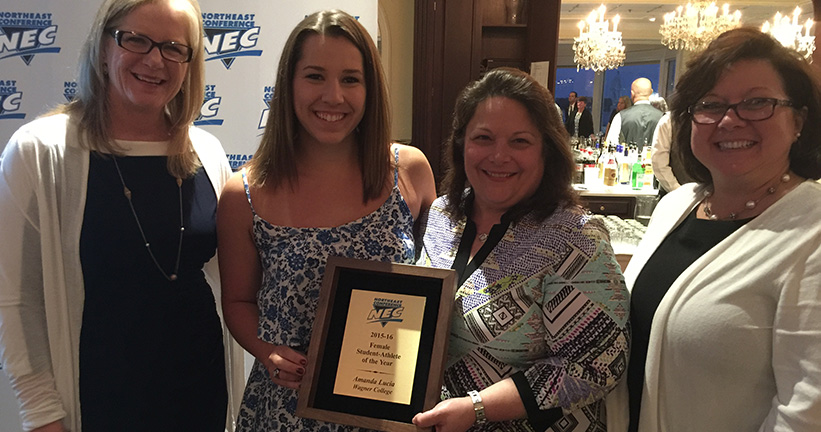 The Provident Bank is pleased to announce Max Vogt, Bryant University tennis player from Granite Bay, California, and Amanda Lucia, Wagner College swimmer from East Hampton, Massachusetts, are the recipients of the 2016 Northeast Conference (NEC) Student-Athlete of the Year Awards. Both student-athletes were recognized on June 9 at the Molly Pitcher Inn in Red Bank, New Jersey, for their individual excellence in both the academic and athletic realms, as well as leadership and contributions to their communities.

The Provident Bank’s Maria Romano, Senior Vice President and Regional Manager, congratulated the student-athletes for their achievements on and off the court, and spoke to the bank’s commitment to financial education and literacy. “On behalf of Provident Bank, I’d like to congratulate these student-athletes for their achievements. We are encouraged by your intelligence and ambition,” said Romano. “Both our commitment to financial education and literacy for people at all stages in life – especially students – and our commitment to our community partners – specifically to the NEC – run very deep. We look forward to continuing this work together in the years to come.”

This marks the first year that Provident Bank was given the honor of sponsoring the prestigious Student-Athlete of the Year awards as part of its multi-year partnership with the Northeast Conference (NEC), established last October. The Provident Bank shares the NEC’s mission to provide opportunities for student-athletes to achieve their fullest potential in the classroom, in athletic competition and in the community.

Vogt graduated with a 3.79 grade point average and earned academic distinction as a four-year member of the NEC Commissioner’s Honor Roll. He also was admitted to the Rhode Island chapter of Kappa Mu Epsilon, a National Mathematics Honor Society, and honored with the William T. O’Hara Leadership Award, presented to the Bryant male student-athlete who demonstrates leadership in the classroom, in the community and within his sport. Vogt is currently employed by Willis Towers Watson in Boston as an actuarial analyst, having passed two actuarial exams to date. Vogt was an integral part of Bryant’s first three NEC men’s tennis championship teams, completing the three-peat this past April. He is a former NEC Rookie of the Year, a two-time All-NEC singles selection and two-time All-NEC doubles honoree. Vogt finished his Bulldog career with 100 career wins (56 singles, 44 doubles).

Lucia, a Nursing major, graduated with cum laude honors after posting a 3.55 grade point average over the course of her career. She was a four-year member of the NEC Academic Honor Roll and compiled a perfect 4.0 GPA in her final semester of college. At Wagner, Lucia was an active member of Sigma Theta Tau, the Honor Society of Nursing. On the athletic side, Lucia won a pair of events at the NEC Swimming & Diving Championships, finishing first in the 200 fly and 400 IM and finishing second in the 100 fly. As a junior, she set a pair of conference and school records in the 200 fly and 400 IM. Lucia ended her four-year career as a seven-time NEC individual gold medalist and was the NEC Outstanding Swimmer of the Meet in her freshman season.

And as for the community, Lucia co-founded, along with teammate Erin Malone, the local chapter of “Love Your Melon,” an organization that raises awareness about Children’s Cancer and looks to provide children who are fighting cancer with comfortable, warm and loving hats. She also has spent much of her time as a student nurse at the CHAD Foundation and at New York Methodist Hospital in Brooklyn, among other volunteer initiatives.

Vogt worked with the Khardalis Charity in Rhode Island as part of a Service Learning Project, helping it receive an $8,000 Capacity Building Grant from the Rhode Island Foundation. In addition, he volunteered each semester for the Rhode Island Special Olympics hosted by the University as well as organized “ICE” week as a means to raise money for Foodshare during his time at Phoenix Life Insurance.

"Thank you to Provident Bank for its support of these prestigious awards, which truly honor the best of the best from around the Northeast Conference," said NEC Associate Commissioner Andrew Alia. "As a fellow New Jersey-based organization, the NEC's partnership with Provident Bank has been a real win-win relationship and we are excited about building upon this year's success in the future!”

For more than 175 years, The Provident Bank has served individuals, families, organizations and businesses within its local communities. As a community partner, the bank strives to deliver a mix of innovative services and social impact that makes a real connection in the communities it serves – always with “Commitment You Can Count On.” For more information about The Provident Bank, visit www.provident.bank or join the conversations on Facebook (ProvidentNJ) and Twitter (@ProvidentNJ).

Now in its 35th year, the Northeast Conference is an NCAA Division I collegiate athletic association consisting of 10 institutions of higher learning located throughout six states. Media coverage of the NEC extends to four of the largest markets in the United States - New York (#1), Pittsburgh (#23), Baltimore (#27), and Hartford/New Haven (#30).  Founded in 1981 as the basketball-only ECAC Metro Conference, the NEC has grown to sponsor 22 championship sports for men and women and now enjoys automatic access to 14 different NCAA Championships. NEC member institutions include Bryant, Central Connecticut, Fairleigh Dickinson, LIU Brooklyn, Mount St. Mary's, Robert Morris, Sacred Heart, St. Francis Brooklyn, Saint Francis U and Wagner. For more information on the NEC, visit the league's official website (www.northeastconference.org) and digital network (www.necfrontrow.com), or follow the league on Twitter, Facebook, YouTube, Instagram and Google+, all @NECsports.