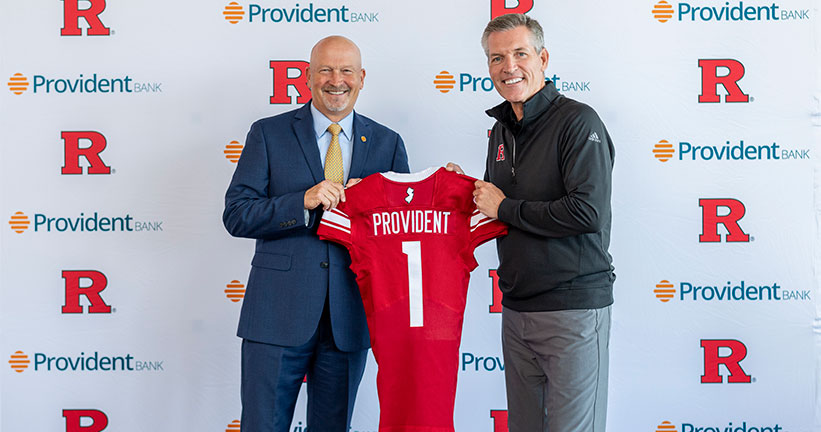 ISELIN, N.J. and Piscataway, N.J. (September 3, 2019) – Provident Bank, a leading New Jersey financial institution, and Rutgers Athletics, today announced a multi-year partnership, which gives the bank the naming rights to the club level of SHI Stadium.  The space will be known as the “Provident Bank Stadium Club.”

As a partner of Rutgers Athletics, Provident Bank will also receive exposure through a variety of marketing and promotional assets, as well as access to VIP hospitality experiences for Rutgers football, and men’s and women’s basketball.

“We are delighted to team up with the state’s premier institution of higher education and extend our commitment to the Rutgers University community.  This partnership allows us to further enhance our brand and elevate our name recognition in the market,” said Chris Martin, Chairman, President and CEO, Provident Bank. “Rutgers Athletics’ commitment to excellence is consistent with our brand promise,” added Martin.

“We are proud to partner with Provident, the first state chartered bank in the history of the State.  Two words not often found together describe this great banking institution, venerable and innovative” said Pat Hobbs, Director of Intercollegiate Athletics, Rutgers University.  “Both Rutgers and Provident share a rich tradition of excellence.”

Founded in 1839, Provident Bank has a deep history of commitment to its customers, communities, and employees.  This commitment now includes the Rutgers University family.

The Provident Bank Stadium Club is located on the club level of the recently renamed SHI stadium, which serves as home to Rutgers football and men's and women's lacrosse.  This season, the Scarlet Knights celebrate its history as the Birthplace of College Football and the sport's 150th anniversary.

Provident Bank, a community-oriented bank offering “Commitment you can count on” since 1839, is the wholly owned subsidiary of Provident Financial Services, Inc. (NYSE:PFS), which reported assets of $9.94 billion as of June 30, 2019. With $6.87 billion in deposits, Provident Bank provides a comprehensive suite of financial products and services through its network of branches throughout northern and central New Jersey and eastern Pennsylvania. The Bank also provides fiduciary and wealth management services through its wholly owned subsidiary, Beacon Trust Company.  For more information about Provident Bank, visit www.provident.bank or join the conversations on Facebook (ProvidentBank) and Twitter (@ProvidentBank).

ABOUT RUTGERS ATHLETICS
The Rutgers Department of Intercollegiate Athletics (Rutgers Athletics), comprised of 24 men's and women's varsity sports serving more than 600 student-athletes, is a member of the Big Ten Conference and governed by the National Collegiate Athletic Association (NCAA). Rutgers is the Birthplace of College Football, hosting the first-ever collegiate matchup on Nov. 6, 1869, a 6-4 victory over Princeton. Rutgers Athletics is uniquely positioned in the nation's largest media market with over seven million television households, along with access to the Big Ten Network and its nearly 60 million homes across the U.S. and Canada. Established in 1766, Rutgers University is the State University of New Jersey and eight oldest higher education institution in the country. As a premier academic institution, Rutgers is a member of the prestigious Association of American Universities.