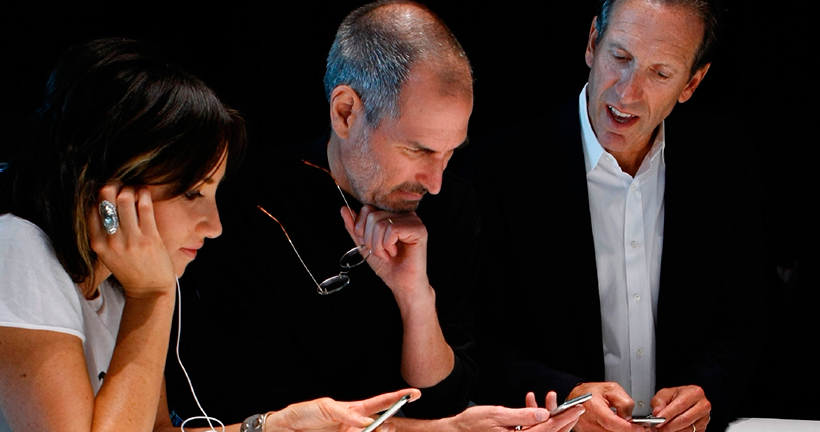 Just before Steve Jobs stepped down as CEO in August 2011, Apple became the world’s most valuable company.

Job’s was a brilliant creative entrepreneur. His fierce desire to create an enduring company that would change the world combined with his relentless pursuit of perfection did, in fact, allow him make his “dent in the universe.” Jobs revolutionized six industries: personal computers, animated movies, music, phones, tablets/apps, and digital publishing. Without Steve, the world would be a much different place.

So what does the founder of a revolutionary, multi-billion dollar global corporation have to do with your smaller, not-quite-so-iconic business? What could he possibly have to teach you about conserving resources?

Quite a lot, actually. Let’s not forget that all entrepreneurs must start somewhere, and for Jobs, that somewhere was his parents’ Palo Alto garage. It seems almost farcical now (or perhaps fated), but Apple was born from $1,300 in working capital, the design for a printed circuit board, and a plan. It was run by two college drop-outs, one a long-haired, bare-footed hippie-type and the other a sweet but socially-awkward naïf.

The two Steves (Jobs and Wozniak) started from the garage ground up, too. From them you can learn how to be industrious and resourceful, making the most of your time, technology, and personnel. You don’t have access to the same resources as a corporate giant like Apple, but you don’t have to feel like you’re lacking anymore!

In the beginning, all Jobs had was Woz. And that was enough. Jobs made it his habit to surround himself with the crème-de-la-crème, or as he dubbed them, A-plus players, over the course of his career. He demanded the impossible, and his top employees usually gave it to him thanks to something they liked to call his “reality distortion field.” Jobs had a mesmerizing ability to bend reality to his will. He used a befuddling concoction of charm, will power, and the resolute belief that the rules of the universe didn’t apply to him to inspire his people. They couldn’t help but believe in his vision—and make it come true.

The lesson here is that one exceptional employee is worth more than 10 mediocre ones. Cut payroll costs by amping up your hiring process. It won’t do much good to know what your prospective employees have done in the past; what you’ll need to test, instead, is their ability to do the work the position calls for. If you’re hiring for a sales position, for example, ask the applicant to perform a mock sales call. If you’re hiring a copywriter, ask that person to write a blog post about a relevant topic.

Once you have your team in place, give them plenty of extrinsic inspiration to achieve greatness. This can come in the form of praise, promotions, or meaningful work.

Jobs possessed masterful focus. When he finally made his way back to a floundering Apple after being ousted years before, he pulled it back it from the brink of bankruptcy. He trained his laser-beam concentration, first, on Apple’s product line. He asked the multitude of product teams to present their work and justify going ahead with their projects.

The review revealed confused strategy and multiple versions of dozens of products. After a few weeks of this inanity, Steve had had enough. He started slashing projects and people mercilessly. Then he drew a grid on a whiteboard, cutting right to the heart of the problem. He labeled one axis Consumer and Pro and the other Desktop and Portable. Your job is to make four great products, one for each quadrant, he said. Simplicity was the mantra Steve lived by.

You don’t have to be as radical as Jobs, but you should frequently review products, processes and tools and identify those extraneous areas that hamper your productivity and drain your resources. Cut the excess and streamline the rest!

The grass is always greener at the other guy’s business. If you just had the same revenue, the same personnel, the same business partners, the same innovative technology, you could achieve the same (or better) success, right? But you don’t have those things. So you might as well work with what you’ve got. Jobs refused to let limited resources stand in his way. Back in that Palo Alto garage he used everything at his disposal to fill the first order of the Apple I boards: his friends and pregnant sister for assembly, his parents’ garage and kitchen table for work space, the house’s TV to test the boards. To make Apple seem more professional, he hired an answering service, which would relay messages to his mother.

He also leveraged his existing relationships (sometimes to the point of manipulation). He persuaded a number of people, like John Scully, president of Pepsi, to leave their current positions to join Apple. When he returned to the company after his hiatus, he made a deal with, of all people, his “arch nemesis” Bill Gates to invest in Apple—and resolve the numerous copyright and patent issues they’d been warring over for a decade.

You should take a page out of Jobs’ book and practice the art of persuasion. Show your employees, shareholders, business partners, and customers why they should buy into your company’s mission.

“Because the people who are crazy enough to think they can change the world are the ones who do.”

Jobs was called crazy over and over again: for trying to create a computer for the masses with a graphical interface, overlapping windows, and a mouse, for believing in a completely integrated end-to-end user experience. He defied the conventional wisdom of the day and refused to license Apple software. He was called crazy for associating his brand with the likes of Einstein, Gandhi, and John Lennon in the “Think Different” campaign. But Jobs believed he knew what was best and forged ahead on gut instinct.

Every business owner needs a little bit of this crazy conviction, this gut instinct, this bravado to make his business thrive. Do not be afraid to think different, try something new, find inspiration in unlikely places.

Jobs designed the Mag-Safe power cord after he saw rice cookers in China that employed a cord that automatically disengaged if it was tugged on. That way, if a person tripped on the cord, the rice wouldn’t end up all over the kitchen. He took this idea and reimagined it for the computer.

Jobs believed he was a rebel, a troublemaker, a round peg in a square hole. He changed things. Pushed the human race forward.

What will you do today?

*This is the final installment of "Safeguarding your Business," a series that educates you on how to stop defending yourself against external business threats. It will help put you in a position of offense, where you can start thinking strategically about your business. If you missed the previous article, you can find it here.