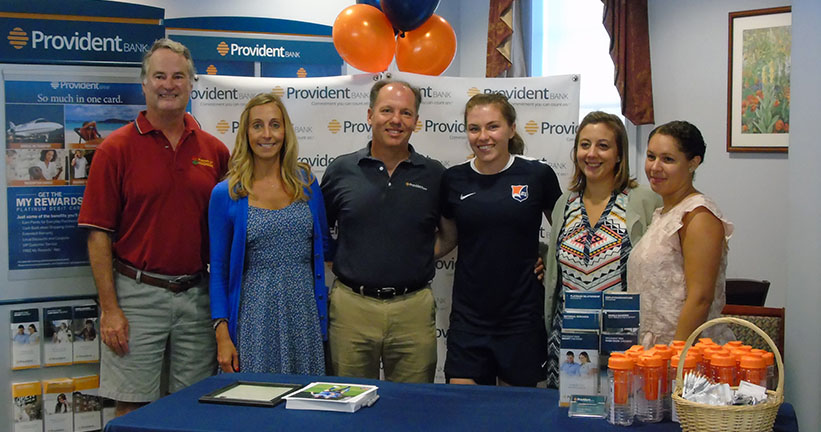 The Provident Bank hosted Sky Blue FC Soccer Team’s forward Catherine Zimmerman for a meet-and-greet on Saturday, August 20 at its Madison branch. Sky Blue fans were invited to pose for photos with Zimmerman, a Madison native, as well as received complimentary autographed game photos and The Provident Bank giveaways. Mayor Robert H. Conley was in attendance and declared the day “Catherine Zimmerman Day” for the borough of Madison.

Earlier this year, The Provident Bank entered into a two-year corporate sponsorship agreement with Sky Blue FC Soccer Team, which included the launch of a “rewards” based program where fans who use their Provident Bank Debit MasterCard® will receive discounted rates for ticket purchases. Additionally, The Provident Bank will be offering fun for attendees including a face painter, balloon artist and giveaways at the following upcoming home games:

The Provident Bank is known for “Commitment You Can Count On,” and provides the most convenient and modern community banking services.

The Provident Bank, (www.provident.bank) a community-oriented bank offering “Commitment you can count on” since 1839, is the wholly owned subsidiary of Provident Financial Services, Inc. (NYSE:PFS), which reported assets of $9.23 billion as of June 30, 2016. With $6.23 billion in deposits, The Provident Bank provides a comprehensive suite of financial products and services through its network of branches throughout northern and central New Jersey and eastern Pennsylvania. The Bank also provides fiduciary and wealth management services through its wholly owned subsidiary, Beacon Trust Company.