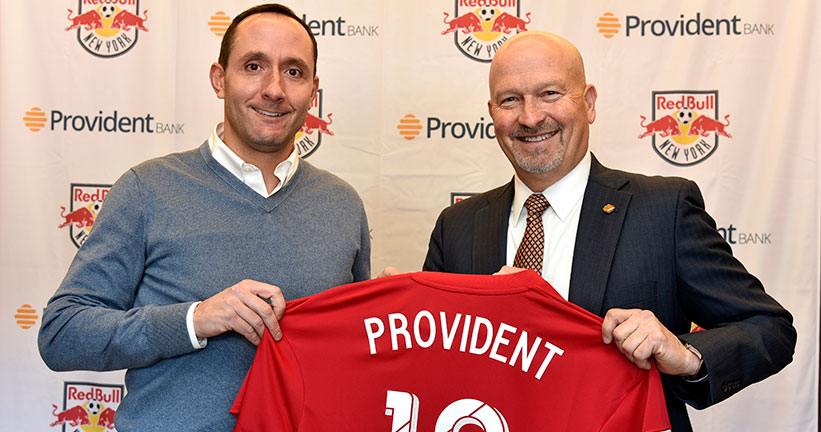 As a marketing partner, Provident Bank will also receive several marketing and promotional assets and access to VIP hospitality experiences. Provident will also participate in community development programs with the Red Bulls.

“Our partnership with the Red Bulls is a terrific opportunity to enhance our brand and elevate our name recognition in the market,” said Chris Martin, Chairman, President and CEO, Provident Bank. “The Red Bulls’ commitment to their fans and the advancement of the sport of soccer are consistent with our brand promise and core values,” concluded Martin.

Founded in 1839, Provident Bank has a history of commitment to its customers, communities, and employees.  This long-standing commitment now includes the NY Red Bulls organization and its fans.

"Our organization is very proud to partner with a true Jersey institution," said Marc de Grandpre, General Manager, New York Red Bulls. "Both the Red Bulls and Provident take pride in a mutual commitment to our community.”

The New York Red Bulls are one of 23 teams in Major League Soccer (MLS). They are one of the ten charter clubs of MLS, having competed in the league since its founding in 1996. They currently play home matches at Red Bull Arena (RBA) in Harrison, New Jersey. RBA, a state-of-the-art 25,000-seat stadium, is widely regarded as the top soccer-specific stadium in North America. The club is owned by the Austrian beverage company Red Bull GmbH for which the team is named.

The New York Red Bulls offer one of the nation's premier youth soccer development programs. The club provides grassroots training programs to all ages and skill levels, and also offers elite players a pathway from those programs to the Regional Development School, then on to the academy teams and, ultimately, to the Red Bulls professional team.