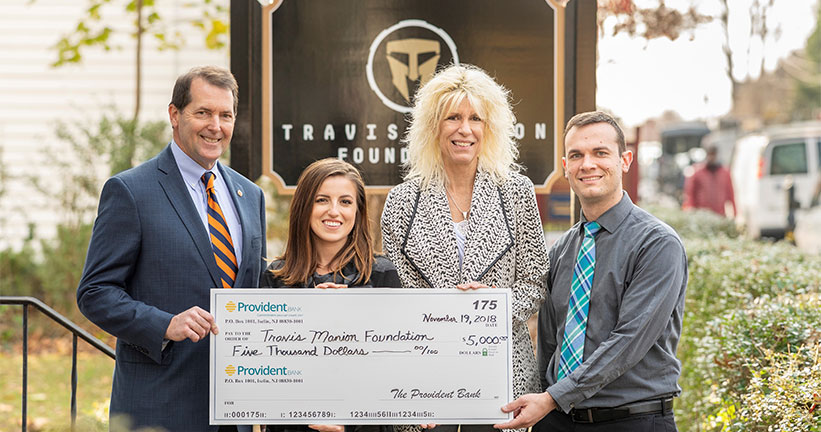 DOYLESTOWN, PENNSYLVANIA (December 10, 2018): Provident Bank employees in Eastern Pa. and N.J. recently raised $2,300 for the Travis Manion Foundation.  To support its employees’ commitment, Provident provided an additional $2,700 in funding, bringing the total contribution to $5,000.  Based in Doylestown, the Travis Manion Foundation is a non-profit organization that unites communities to strengthen America's national character by empowering veterans and families of fallen heroes to develop and lead future generations.

Provident Bank, a community-oriented bank offering “Commitment you can count on” since 1839, is the wholly owned subsidiary of Provident Financial Services, Inc. (NYSE:PFS), which reported assets of $9.71 billion as of September 30, 2018. With $6.72 billion in deposits, Provident Bank provides a comprehensive suite of financial products and services through its network of branches throughout northern and central New Jersey and eastern Pennsylvania. The Bank also provides fiduciary and wealth management services through its wholly owned subsidiary, Beacon Trust Company.  For more information about Provident Bank, visit www.provident.bank or join the conversations on Facebook (ProvidentBank) and Twitter (@ProvidentBank).

About the Travis Manion Foundation

Travis Manion Foundation (TMF) is a 501(c)3 non-profit organization that unites communities to strengthen America's national character by empowering veterans and families of fallen heroes to develop and lead future generations. In 2007, 1st Lt Travis Manion (USMC) was killed in Iraq while saving his wounded teammates. Today, Travis' legacy lives on in the words he spoke before leaving for his final deployment, "If Not Me, Then Who..." Guided by this mantra, veterans continue their service, develop strong relationships with their communities, and thrive in their post-military lives by serving as character role models to youth. As a result, communities prosper and the character of our nation’s heroes lives on in the next generation.